“Mommy!” Declan stood in front of me with a Lindt truffle. “Please don’t put these in my lunchbox anymore. They’re yucky.”

I’ve been sick, and I haven’t been fun. I feel guilty. So, I put some extra treats in the lunchbox. The Halloween candy went missing, so I put a single milk chocolate truffle in his box. The kind that I save for adults and dignitaries. Sharing that’s a big deal. I was being extra nice…like when I give up my seat for an old person or lay out the best spread for company.

“They’re not caramel, they’re truffles. Really good chocolate. They melt in your mouth and make you happy.”

“Well, I’m not happy. They’re yucky.” I remembered a lesson my brother taught me. You don’t waste good food on children. I went downstairs and found the bag of Halloween candy so I can chuck in a little Kit Kat tomorrow. 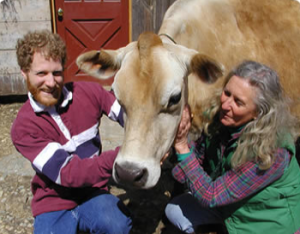 Cato Corner Farm, where Elizabeth MacAlister and her son, Mark Gillman have been making some of the world’s best cheese since 1997.

Kids don’t appreciate good food, so they haven’t earned the right to get any. Nothing that costs over three dollars a pound should be given to kids in the single digits. Cheese comes to mind. My brother,  has worked with some pretty impressive foods and chefs. One day he taught me this lesson I hold dear to this day, “Never waste good cheese on children.” I buy Declan cheap American cheese. In this way, I am able to afford the best cheeses for myself, and not feel like I am breaking the bank. I can get the best chèvre, Manchego, brie, Stilton, camembert, Roquefort, and even try something new whenever I want. I love cheese, but it’s not cheap. Turns out, one of the nation’s renown cheesemaking operations has popped up in my hometown of Colchester, Connecticut, in a little farm called Cato Corner Farm. I’m proud to have some awesome cheese near where I grew up, but when it’s $10-$30 a pound, nothing would strike terror in my heart more than, “Mommy, can I have another hunk of that Drunken Hooligan?” It’s an amazing cheese even at $30/pound. I’m surely not going to waste so much as a sniff on Declan. He can sniff the cows while I sample the cheeses.

Declan hates the cheese aisle, too. He tries to escape by saying, “Uncle Dan said you should never waste good cheese on children. Get away from here!” It’s amazing that the boy can overhear a conversation three rooms away but can’t follow a simple direction when I’m staring right in his face.

Along these lines, I’ve started keeping a few inferior ingredients in the house. The emergency box of mac and cheese for lowbrow kid company, and a couple burgers in the freezer. I hate that Thomas Jefferson’s beloved mac and cheese has been bastardized and put in a yellow and blue boxes. I make it from scratch every time.

The last straw was brownie mix. Declan had his first boxed brownie at an event.

“Mommy, can you get boxed brownies?” My heart died a little bit. I make brownies from the highest quality fair-trade cocoa or melted chocolate with farm-fresh eggs from down the street and local butter. Mea culpa. It’s time to stop wasting good ingredients on children. He’s in school now, he sees the tasty processed food everyone eats. He feels left out. He needs to feel like an all-American boy. So, instead of making cheese pizza by hand with homemade dough, sauce and home-grown basil, he can have school lunch cheese pizza today. He’ll be happy as a clam, and I’ll save money for things that really matter–getting good food for the adults around here who appreciate it.

Maybe, just maybe, he can taste my brownies and the Drunken Hooligan in a decade or two. For now, I’ll keep my grocery bill down.