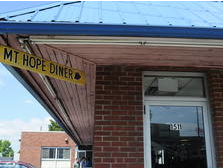 I needed a job badly. School was expensive. After the financial aid was subtracted, I still had a ton of cash due to the University each month. I moved off campus–our campus housing was like a country club. The food was great, the housing decent, and both were priced accordingly. It was more affordable to live off campus. I needed to work. There was a diner being built down the street sporting a “Help Wanted” sign. How fortuitous.

I walked in the front door. It was still under construction. There were guys doing various degrees of finish work–a guy was working on a booth and another guy was bent over some sheet rock.

“Yeah,” said one guy, busy looking for a nut or bolt at that very moment.

“I brought my resume.” I said, extending the paper.

The room stopped. All the construction, the bustle, suddenly came to a halt. All eyes were on me.

“Hey, she’s got a resume.” The guys in the back began to laugh. Not just a normal laugh–a headliner at the Comedy Connection laugh. A guffaw.

“A resume!” Laughter. I heard the word a couple more times, choking between the laughs, as the joke was telephoned to every man in the joint, with a new bout of laughter ensuing each time.

I was hired. I don’t think it was my resume–apparently, I learned many jokes at my expense later, one doesn’t apply for a job at a diner with a resume. One goes in, hopefully sober, and gets the job.

I was hired to waitress. “Hey College Girl…get me some coffee!” I heard that a lot.

Working at a diner isn’t easy. It’s a tough crowd. It wasn’t college, though at times hung over fraternities came in. I’d wait on them. I’d wait on all the crazies, particulars, and undesirables. We were located very close to the psych unit of the local hospital, where interesting people abound. Perhaps my boss and the other waitresses thought my college courses included psychology or patience (they did not–they included “work or starve”) Maybe the other staff simply didn’t want to wait on these people. I worked hard.

I quit the diner–I couldn’t randomly stay and close when staff failed to show–I had classes. My boss had a business. I was straddling between both worlds, not really understanding what having a business means. It means you deal with that stuff at all costs.  Now, having my own business, I get that. You don’t just shut the doors because you have a Gospel Choir concert or 2PM class or an ice storm. You stay. You deal. You make things work. These are things entrepreneurs get but “College Girl” wasn’t equipped to understand.

I ran into my boss at the grocery store a few months after I quit. “You were right. She was stealing.” He apologized. I knew I was right. That’s what college is for. Taking stands that made you quit because you were right, while you totally miss the big picture.

I get the big picture now. I write this by way of apology.

That diner was my intro to real life, whether I knew it or not at the time. I was being given the biggest gift of all–getting to be part of the city, part of the good people, receiving mentorship from the real world. My boss always told me, “You’re good with people.” He wanted me to drop out of “that useless college” and do something “real”–a daycare perhaps. He’d front the cash. He knew an opportunity when he saw one.

I wanted to finish college. After college I wanted to finish graduate school. I did. And I did a little bit more, just for good luck. I loved them all.  I read, studied, and networked. I wouldn’t be where I am today without having done so. But my real education–I got at the diner.

I returned to the diner after some time in the Corporate world. I sat down for  lunch. “Hey,” shouted my boss. “Get College Girl some coffee!” That’s when I knew I had earned a modicum of respect, even though I’d gone to college. Years later, when I watch our business grow and succeed today, it’s this boss I remember–the guy who could turn anything into an opportunity. The epitome of entrepreneurship.

“What can you do?” was his mantra. Not “How many books can you read, or how much debt can you incur?” Nobody in that business ever asked to see my sheepskins.

It took me nearly two decades, but I finally understand. Creating businesses and opportunity is hard. This stuff doesn’t magically appear. None of this is easy. This is one lesson I wished I understood while I was standing in that diner. It’s one lesson I hope to impart to my own students. It’s something “the tests” don’t measure and we don’t teach well systemically.

When you make, create, and work through problems, you do something that no 9-5 job does–you create a space for yourself in society. A unique spot in the universe nobody can take away.

This is what I’ve learned. It’s what I’d like to teach going forward.